I haven’t lived in a small town my whole life. Up until nine years ago I was a big city girl. Okay— maybe a modest city girl— residing in cities around the four hundred thousand population. It wasn’t my choice to move to a small town. My husband got a job in the fire department and there was a law in the city ordinance that said anyone working for the town had to live within the town limits. It sounded like a good idea in theory. A quaint old mining town, surrounded by scenic mountains. I imagined finally getting to know my neighbors on a first name basis. I admit it, I’ve watched a few lifetime movies about small town living that made it seem quaint and charming. What no one told me—there was no movie theater, no Starbucks!! When we first moved here the only option for internet was dialup. Small town living was certainly a huge shock to my system.

The first week in town, everyone I met demanded to know where exactly I lived. They didn’t care about the street I was on as much as they wanted to know specifically which house I occupied. Turns out I lived next to the house that use to have a bird bath in the front yard. And for the next few months when the question would arise--that’s how I would answer, “next door to the house that used to have the bird bath in the front yard.” And whomever I told would nod their head and be satisfied.

I never took my husband’s last name. Where I came from that was not an usual practice, but now that I was a small town resident I was forced to explain this choice to the bank teller, bank manager, hair dresser, the post office clerks, and the grocery tellers.

I now make my own coffee each morning and I used to wait ten minutes for any webpage I visited to download. I admit I was pretty miserable for the first six months. But then, I started to get into the rhythm of small town living.

I started to enjoy hearing the big town gossip while standing in the line at the small grocery store (I knew it was serious gossip if I later heard it again repeated in line at the post office.) Anytime I drove my car around town people would wave at me and before I knew it, when someone new moved to town, I demanded to know which house they lived in!

I’ve lived here for nine years and I have to say that I’ve really grown to love my small town living. We don’t have a coffee shop yet, but we have a dollar store! And a few years ago fast internet made it to town. I’m still keeping my fingers crossed that one day I’ll see a fast food joint pop up, or maybe even a Starbucks…

Thanks for reading about my small town living. Did I forget to mention that my small town has a seriously spooky vibe? Because it’s a very old mining town, it’s full of old buildings. Buildings that may or may not be full of spirits. Do you believe in ghosts? I do! Because of this spooky vibe all around me when I went to write Awakening I naturally had to include ghosts. Awakening is a story full of magic and spirits. I hope you get a chance to check out more about my four book YA paranormal series—The Dark Rituals.
http://fullfathomfive.com/writers/catrina-burgess/the-dark-rituals/ 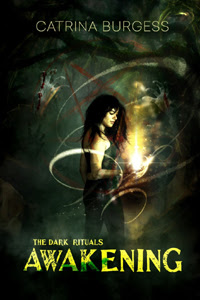 In Awakening, the first installment in the Dark Rituals series, a former healer turns to the Death Arts to seek revenge.
Seventeen-year-old Colina was born a healer. But after a horrific event forces her to leave her clan, she becomes desperate to learn the dark magic of the death dealers, mages who draw their power from the spirits of the dead. Colina was taught to fear and hate death dealers, but becoming one of them is the only way for her to get the revenge she seeks—and the only way for her to survive.
Colina asks a young death dealer named Luke to help her, but he’s reluctant to train her in the Death Arts. Little does she know convincing him to teach her will be the easiest part of her journey. To become a death dealer, Colina will need to undergo three dark rituals, each more terrifying than the last. At the same time, she’ll have to deal with her growing feelings for her mentor. Too bad the first ritual involves him strangling her to death.
As Colina undergoes the trials, she discovers an untapped darkness within herself. If she survives the horrific rituals and gains dark power, what will she become?


Catrina Burgess’ Dark Rituals series originally appeared on Wattpad with over three million reads. Awakening is the first book of four and was named Wattpad’s Best Suspense Story of 2014. 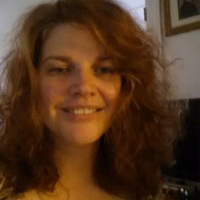 I write because it helps keeps the darkness away and reminds me that there is magic in the world. I live with one husband, two dogs, and a cat named Shitty Kitty in a small mining town in Arizona. At night this place is definitely spooky. I swear I’ve heard the wind giggle, and sometimes there’s a very odd breeze. Luckily, I love all things that go bump in the night. I adore old movies. I’m a huge Joss Whedon fan.
I’ve been known to eat pizza and cold Chinese food for breakfast, and I’m the queen of the board game Stratego. I’ve never been beaten. NEVER!
Posted by Ivy at 6:00 AM

Find me on Goodreads

If you're commenting to enter a giveaway, please leave your email. This will allow us to contact you if you're a winner. Thank you!

Unless otherwise stated, all print giveaways are limited to the US only. We are not responsible for non-receipt of prizes given by third parties.

If you would like to donate swag or books to be given away please contact me at ivydtruitt (at) gmail (dot) com.

If you would like to be featured, interviewed, or have your book/series on our blog please contact me at the above email.

If you would like to request a review we can accommodate PDF, epub, and mobi. Not all books submitted will be reviewed.
Series books will be reviewed if we have the whole series, we have read the series to that point, or it can stand-alone. Sorry, bit of a purist about this.
Reviewers are the only ones with access to books.
If you post/use any parts of our reviews please credit us or link back to us.
By submitting you are agreeing to these terms. Terms are subject to change without notice.